Lynne Taetzsch was born in East Orange, New Jersey and grew up in Irvington and Newark, New Jersey. She was interested in art from the time she was a child, spending her allowance on arts and crafts supplies, painting the school windows for the holidays, and winning a class drawing contest in eighth grade. As a young teenager she took oil-painting lessons from a local artist and later she was president of her high-school art club.
At Rutgers University, the University of Southern California, and the University of California, Lynne took art classes in painting, print-making, drawing and pottery. But the biggest influence on her art was the two years she spent at Cooper Union for the Advancement of Science and Art in New York City, where she had classes in calligraphy, architectonics, one and two dimensional design, life drawing, and painting. This is when her work gradually became more abstract as she experimented with collage materials in an intense focus on composition.
Lynne has lived in Florida, California, New Jersey, Virginia, Kentucky, and now in the beautiful Finger Lakes region of New York State. She's worked as a secretary, a writer, an editor, a publisher, a junior-high English and Math teacher (six months), a business trainer and manager, a Kirby vacuum cleaner salesperson (one week), a leather crafter, and a college professor. Through most of it, she kept painting, and since the spring of 2000 she has been painting full time in her studio in upstate, New York.
In the early eighties Lynne switched from oil paint to acrylics. She found that acrylics fit her style better because they dry quickly. She works on a painting over many days, adding layers that accumulate without totally eradicating the previous images. She paints standing up, listening to jazz, classical, or rock and roll. The process of painting in broad gestures with a brush or palette knife gives her work its sense of intense energy. Like jazz, the heart of her art is improvisation.
Lynne’s work has been shown in solo and group exhibitions in galleries and museums throughout the United States and abroad. Stan Bowman, professor emeritus of the Cornell University Art Department, said in a review of Lynne’s exhibit at the Clinton House ArtSpace in Ithaca: “Taetzsch is a painter very much in the tradition of the best of 20th century abstraction.”
Describing her painting process, Lynne says: I am of course indebted to all the artists who came before me, for the wonderful ways they have transmuted color, line and shape. Some of my very special art connections are Miro, Kandinsky, Matisse, DeKooning, Hans Hoffman, Helen Frankenthaler, and Joan Mitchell.
In the early stages of a painting, I work very fast. This helps give my art its sense of energy and spontaneity. I like to trick my conscious mind by not letting it have too much control over what happens. In some ways I’m creating a mess or a problem that I then have to solve in order to make the painting work.
It’s the painting surface that I love - the lusciousness of color in its thick and thin varieties, flat and opaque to keep the eye on the surface, or transparent and airy to suggest deep space. My goal is to stay as close to the edge as possible, to keep that sense of organic happening, as if the painting had grown itself rather than having been crafted by me. 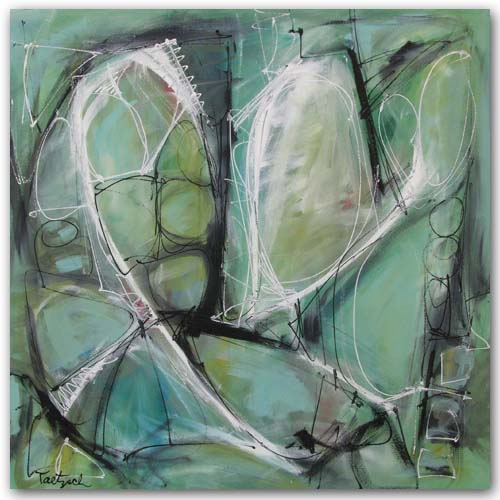 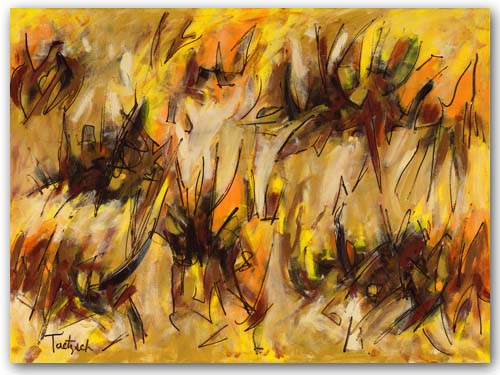 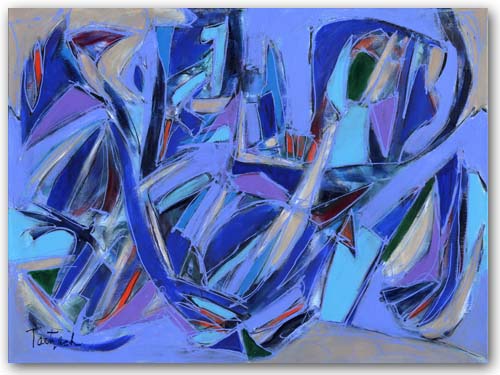 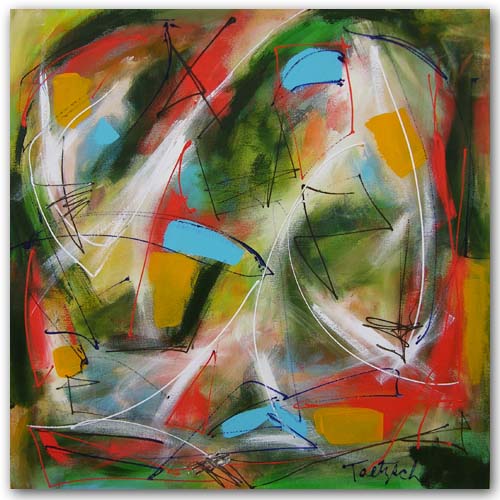 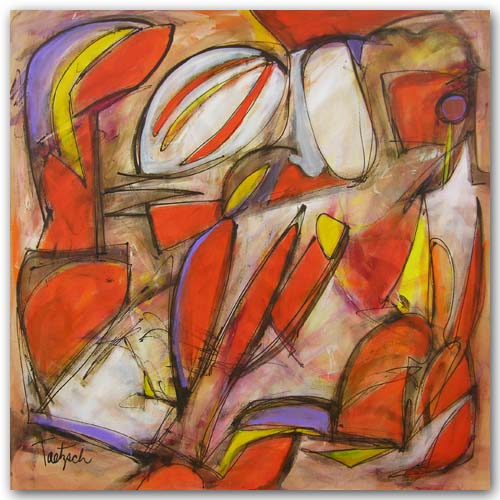 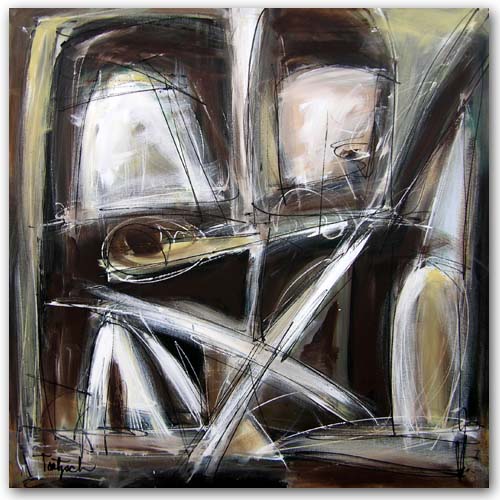 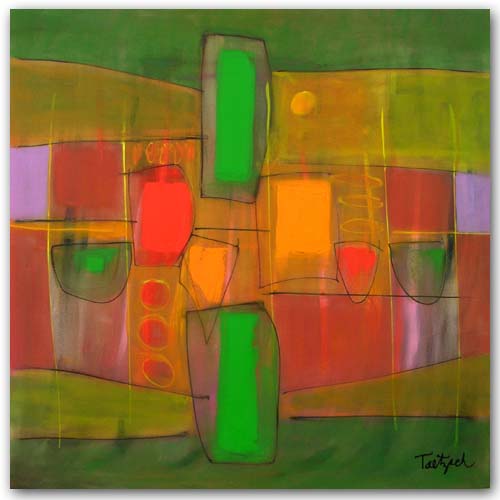 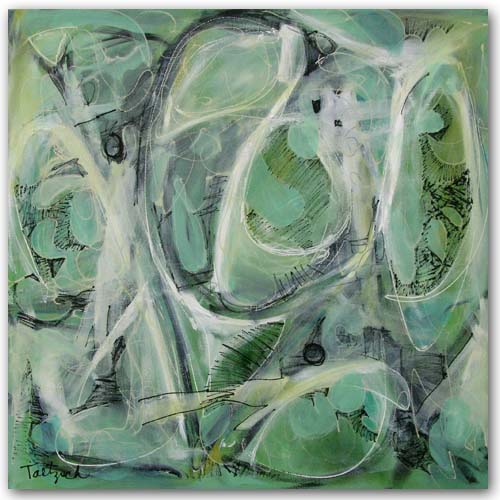 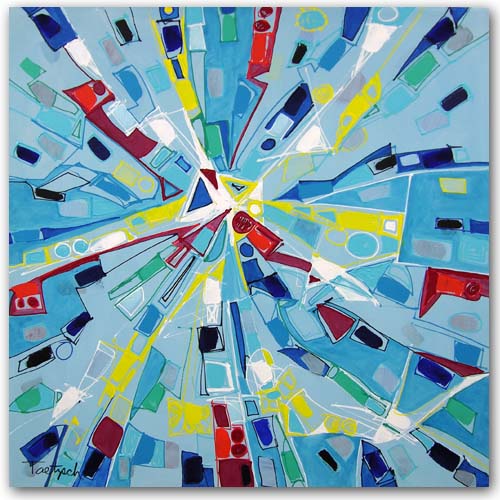 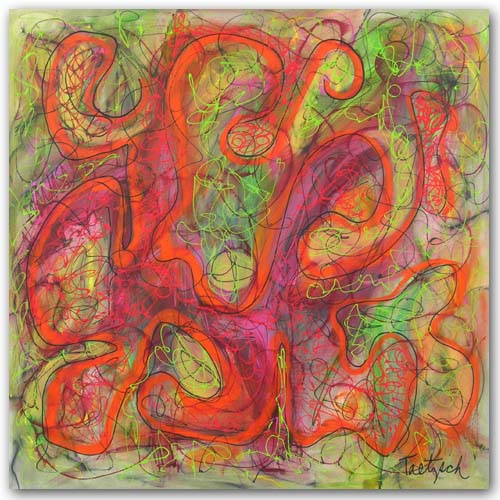