Most of my work involves hand dyed fabrics, cotton and silks, images and landscapes from photographs of my travels, having lived abroad for 20 years, in Turkey and Germany. I have a quirky sense of humor which plays out in much of my work. I have no formal art education, but have sewn all my life.
All images are from photos taken by the Artist, or her friends, with permission granted to use them.
Notable Exhibits:
• Bridge 2017 Studio Art Quilt Associates Oregon statewide exhibit of art quilts themed “Bridge” traveling for two years. Anne has two quilts, Linking Europe to Asia, depicting the first Bosphorus Bridge in Istanbul, and Bridge to Progress? A fanciful transportation hub with trucks, light rail, bridge in construction with the paving machine, and of course, a minor accident with traffic backed up.

• Pathways 2017 Studio Art Quilt Associates Valley South group currently has an exhibit at the Memorial Union at OSU for Quilt County. Anne created a new technique using painted cloth, tulle, depicting the subject of a street in old Istanbul, from a photo taken in 1972.

• Gems of the Ocean 2017 Yachats, Oregon. A short juried exhibition of art quilts depicting the beauty of the ocean. Anne’s three quilts were accepted, all based on photographs of Yachats. The Third Best Sunset in Yachats, Ever was selected for a publicity photo for the show.

• Blending Poetry in Cloth 2015 Oregon Studio Art Quilt Association traveling exhibit. Juried show depicting the artist’s response to a song, a poem, creating the image in the quilt. Anne’s was The Painted Ship, based on The Rime of the Ancient Mariner. As a retired English teacher, whose father’s favorite poem was the Rime, this was an absolute no brainer decision. Execution was a bit more difficult.

• Exploring Layers, 2014 Oregon Studio Art Quilt Association’s traveling exhibit. This group of art quilts are juried from member submissions by noted artists and jurors, and travels the state for two years. “Exploring Layers” has been at Coos Art Museum, Coos Bay; Chehelem Cultural Center, Newberg; and will be exhibited at Pioneer Place, Portland during the National SAQA convention in April, 2015. The quilt, Canyon de Chelley is based on a photograph taken by a friend in 1973 of the Anasazi dwelling in Northern Arizona.

• The Creative Process, Umpqua Valley Arts Association January 2014 was an invitational, multi media exhibit featuring 15 artists showing the process by which they create their work. Anne was the only Fiber Artist in the show. The quilt Anamur Castle, was based on a photograph taken in 1972 by a friend, of a medieval castle on the Mediterranean coast of Turkey.

• Passion Forward 2013 also by SAQA members from the Willamette Valley Southern region was exhibited at Oregon State University during Quilt County, 2013. Anne exhibited several quilts from her “Old Stones” series, based on photographs of antiquities taken during her time living in the Middle East. Palmyra, Syria, Roman Aqueduct, Segovia Spain, and the Tryptic of Bamiyan, Afghanistan were from that exhibit. Many of these sites are World Heritage Sites.

• Umpqua Valley Quilters Exhibit 2012: Anne was awarded a blue Ribbon for a large quilt depicting the variety of trees in Oregon. The Trees We Hug.

• Hoffman Challenge: 2012 A traveling exhibit of quilts sponsored by the Hoffman Fabric Company requiring the artist to use significant amounts of a selected fabric chosen by the company. The selected quilts traveled for over a year, throughout the United States. The quilt, entitled “Sea Grass Cottage” was a fanciful seaside garden based on a photo by the artist of a cottage of the same name in Yachats, Oregon. 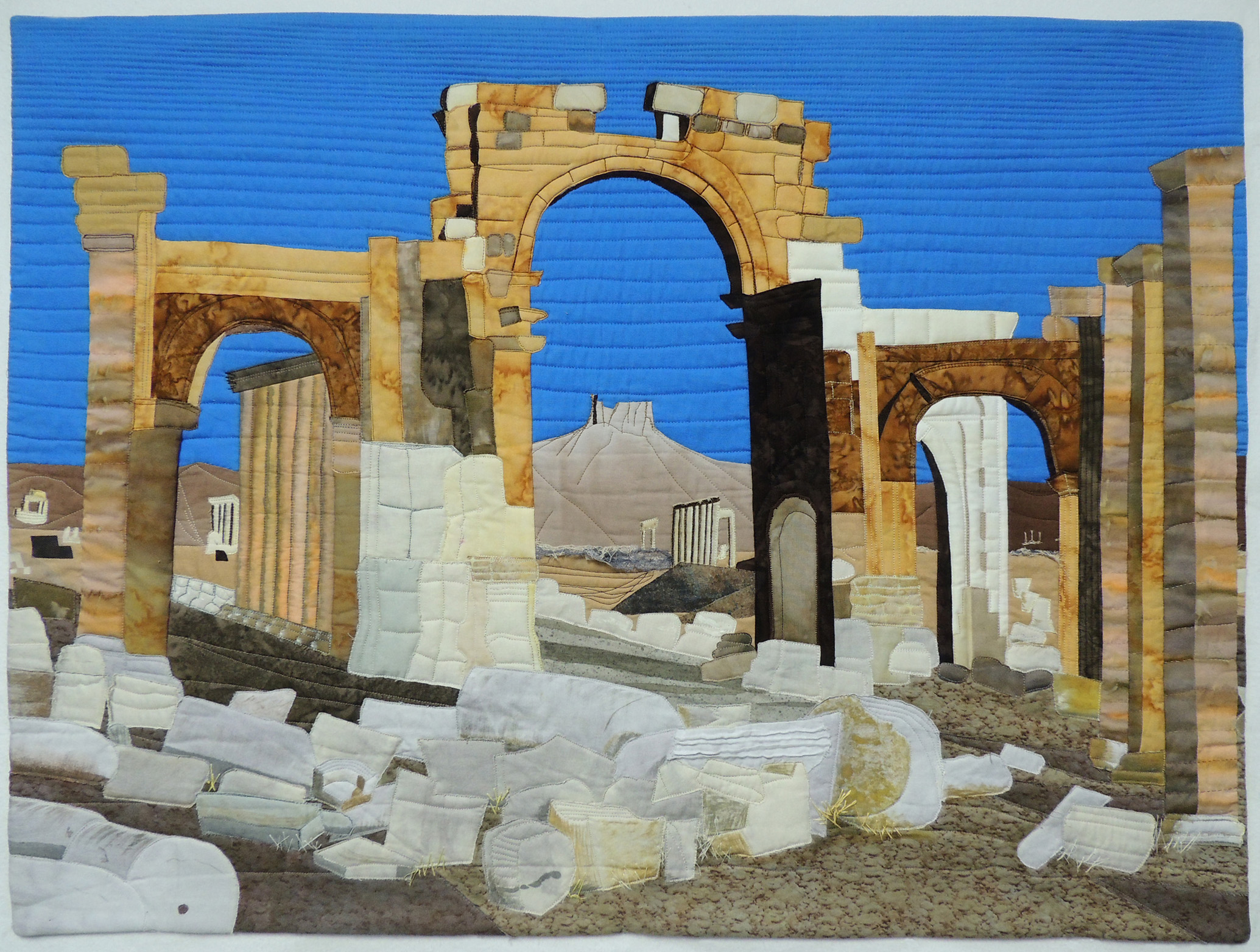 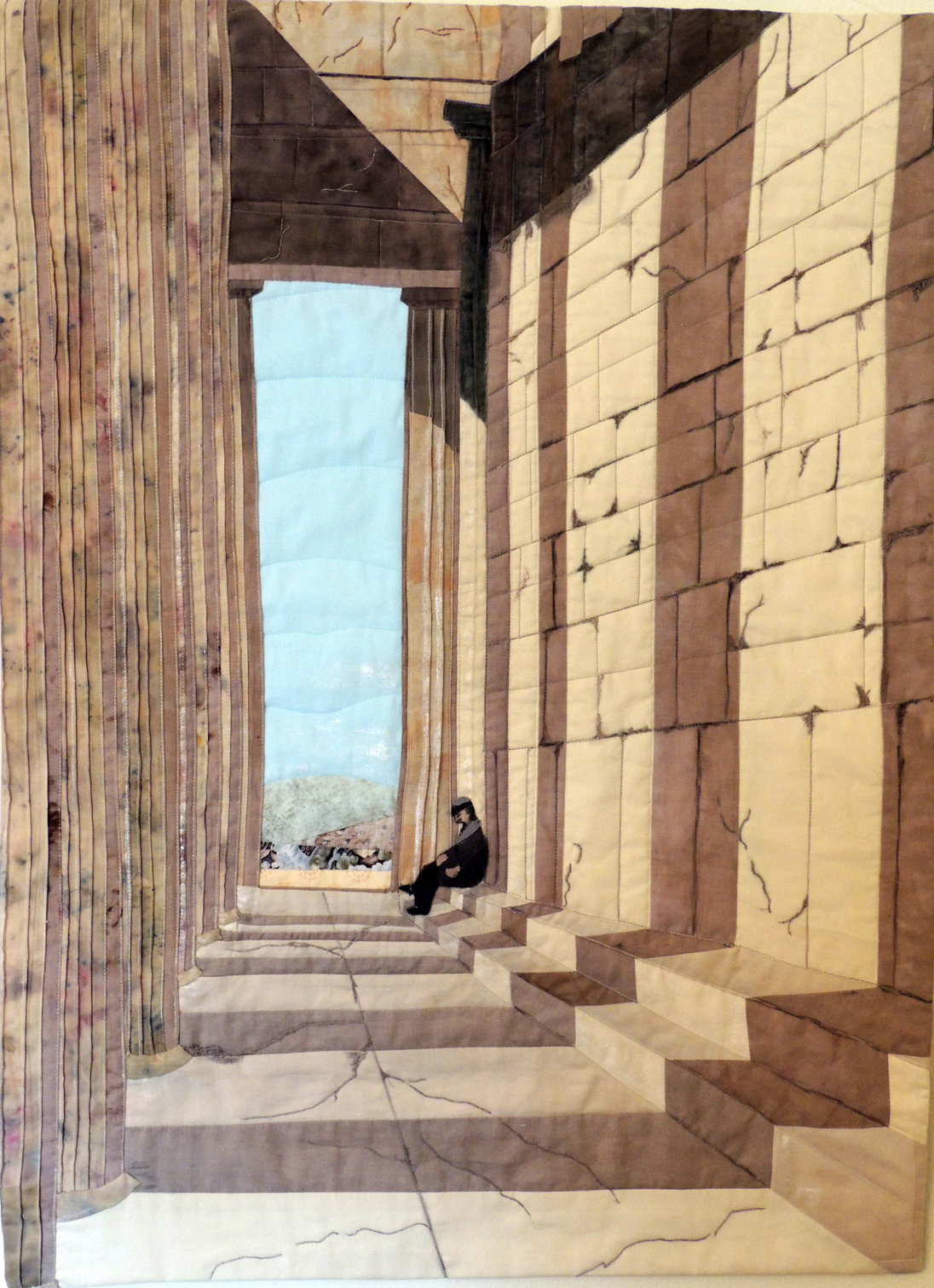 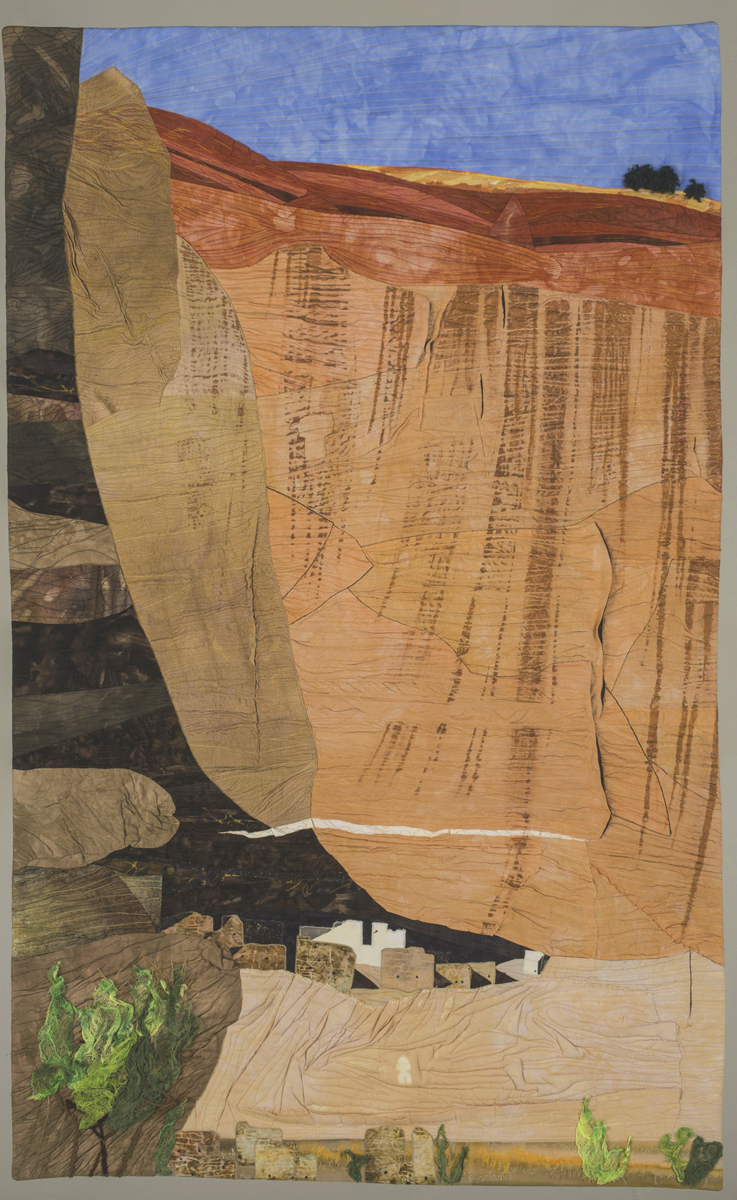 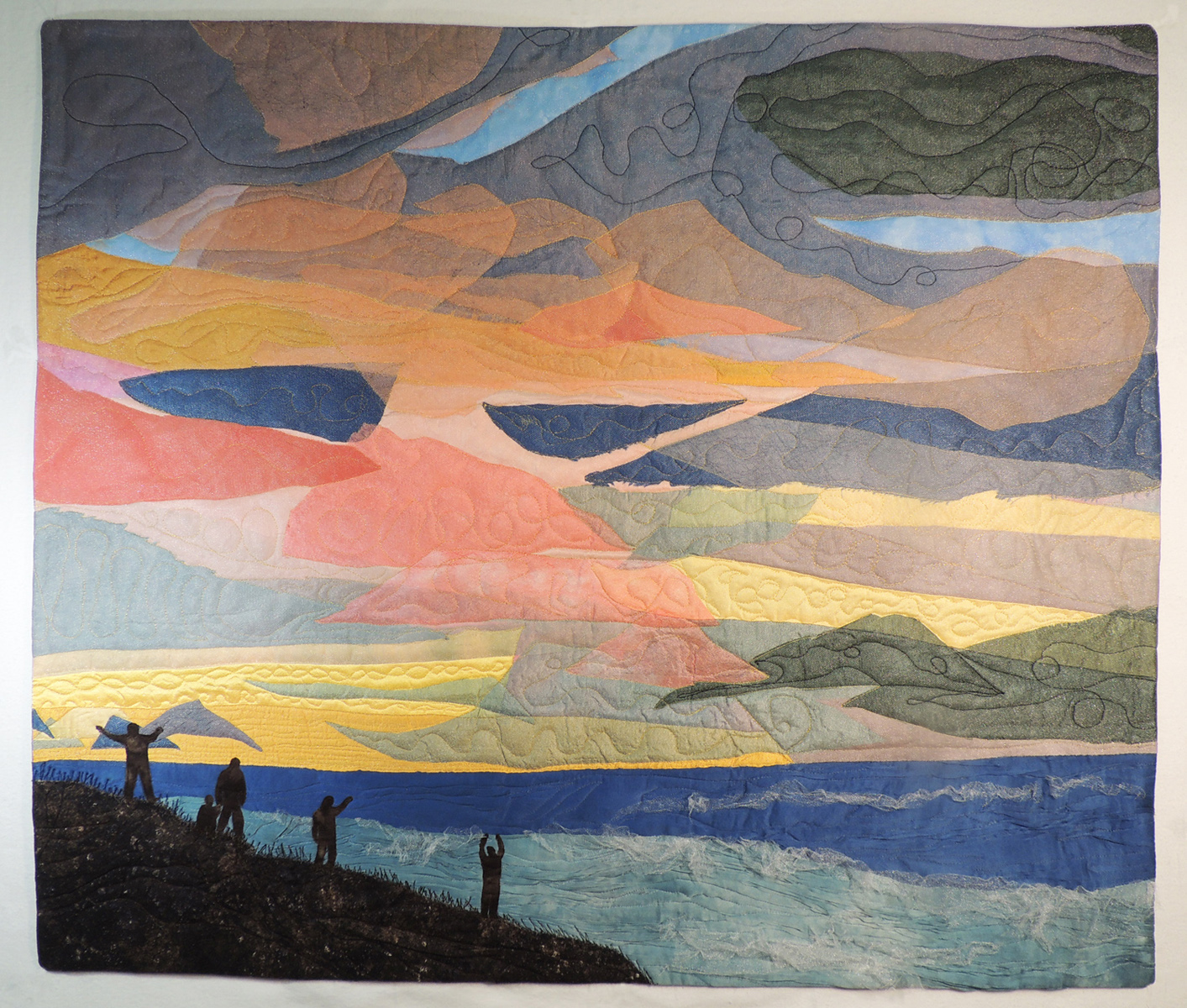 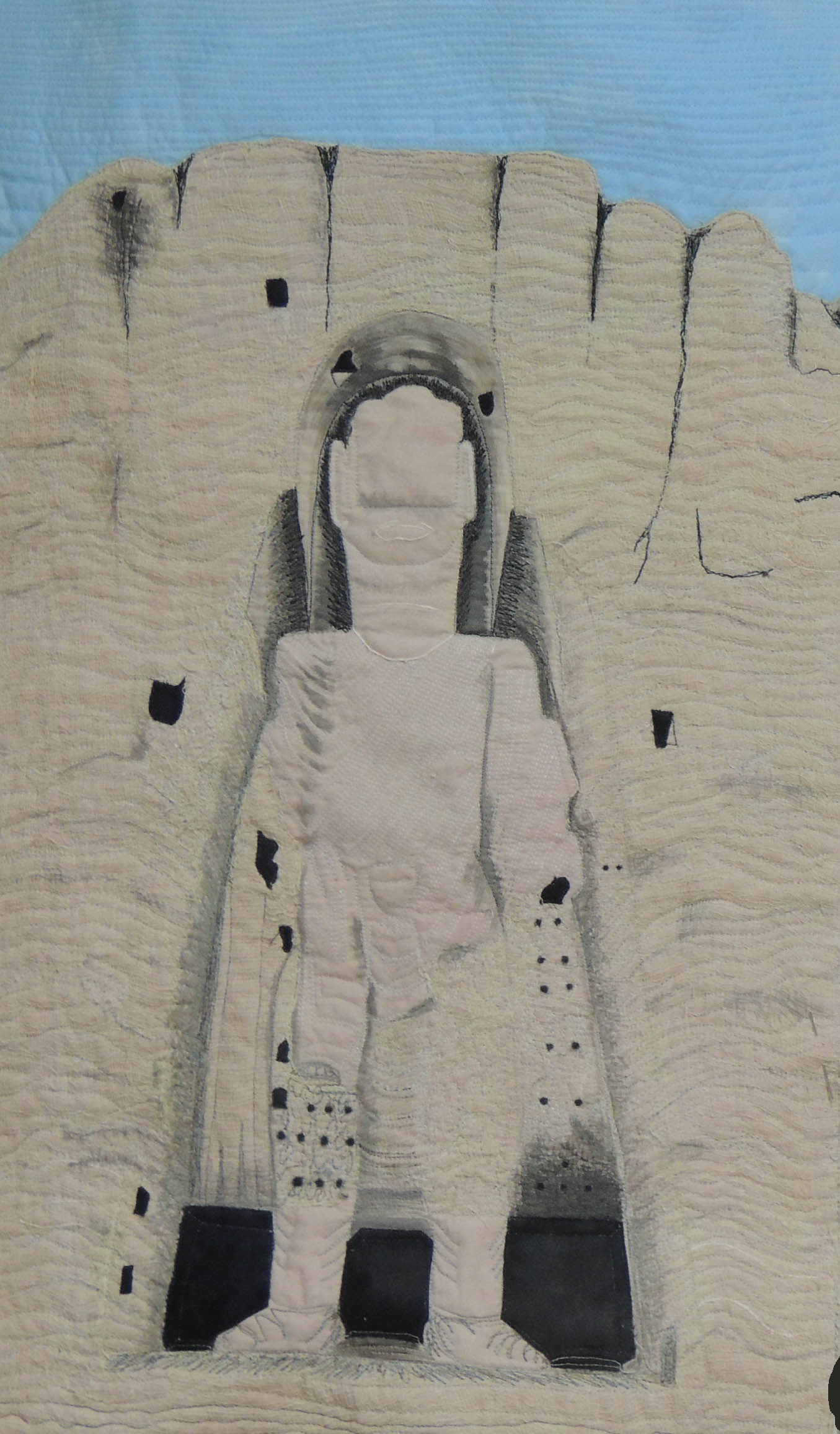 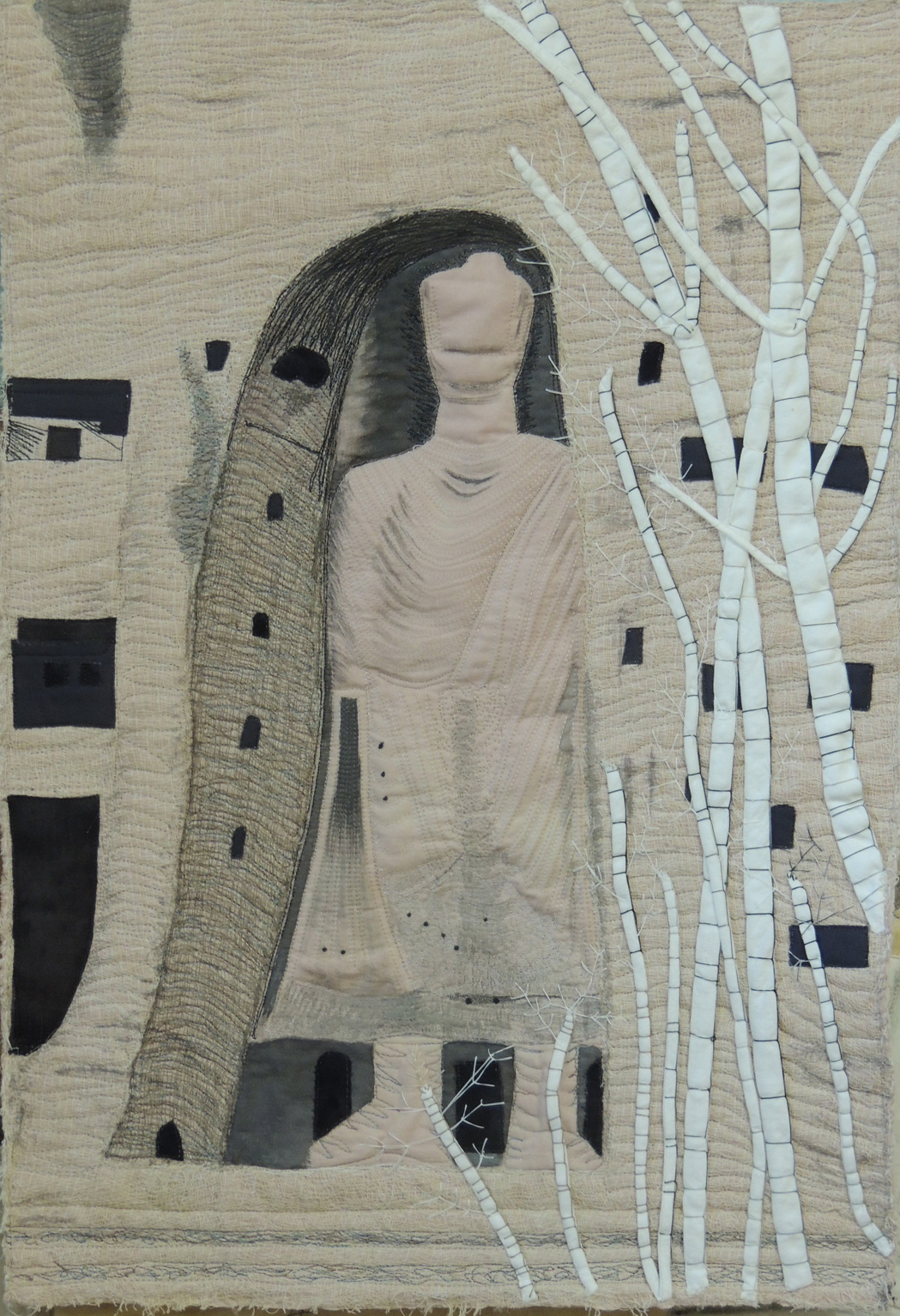 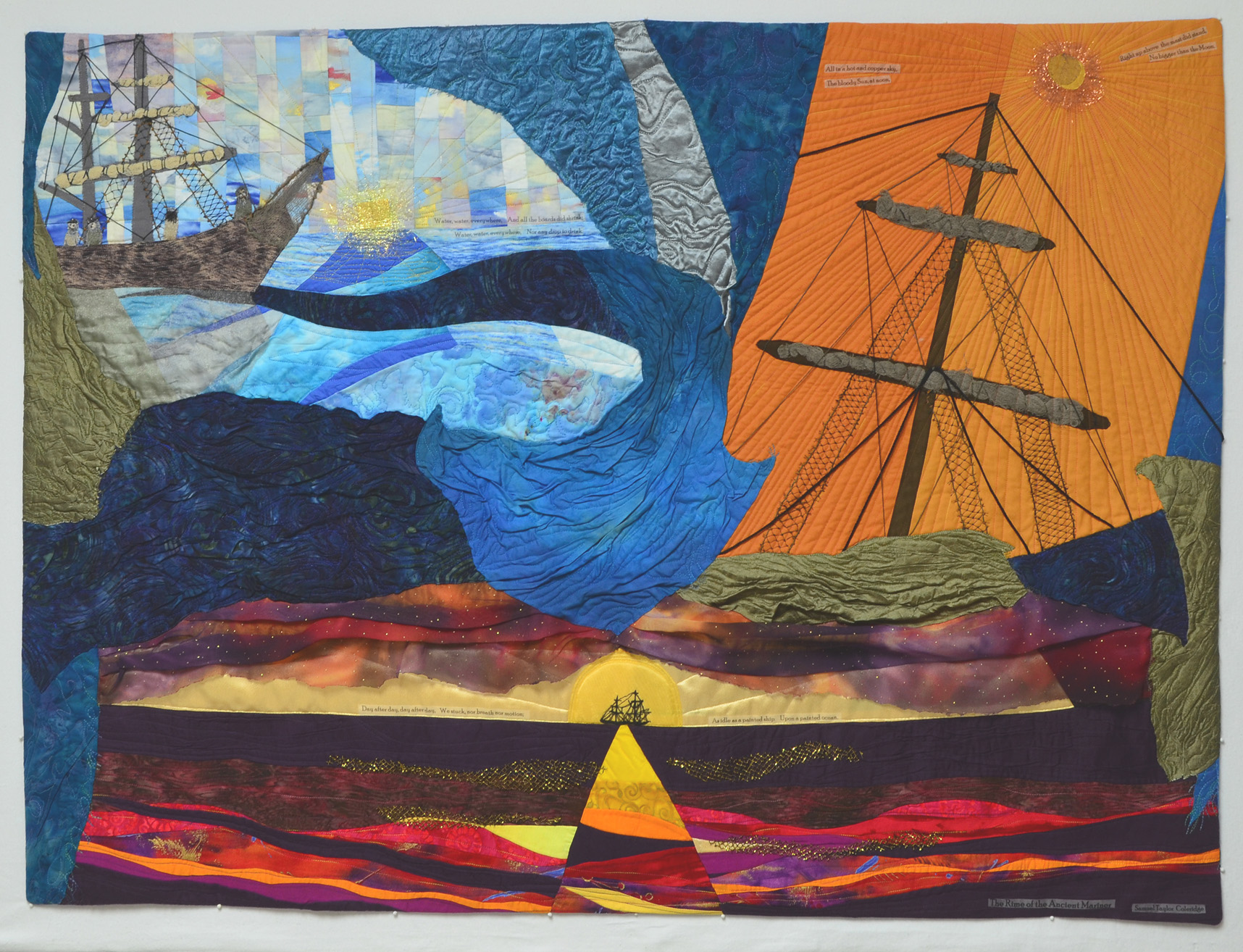 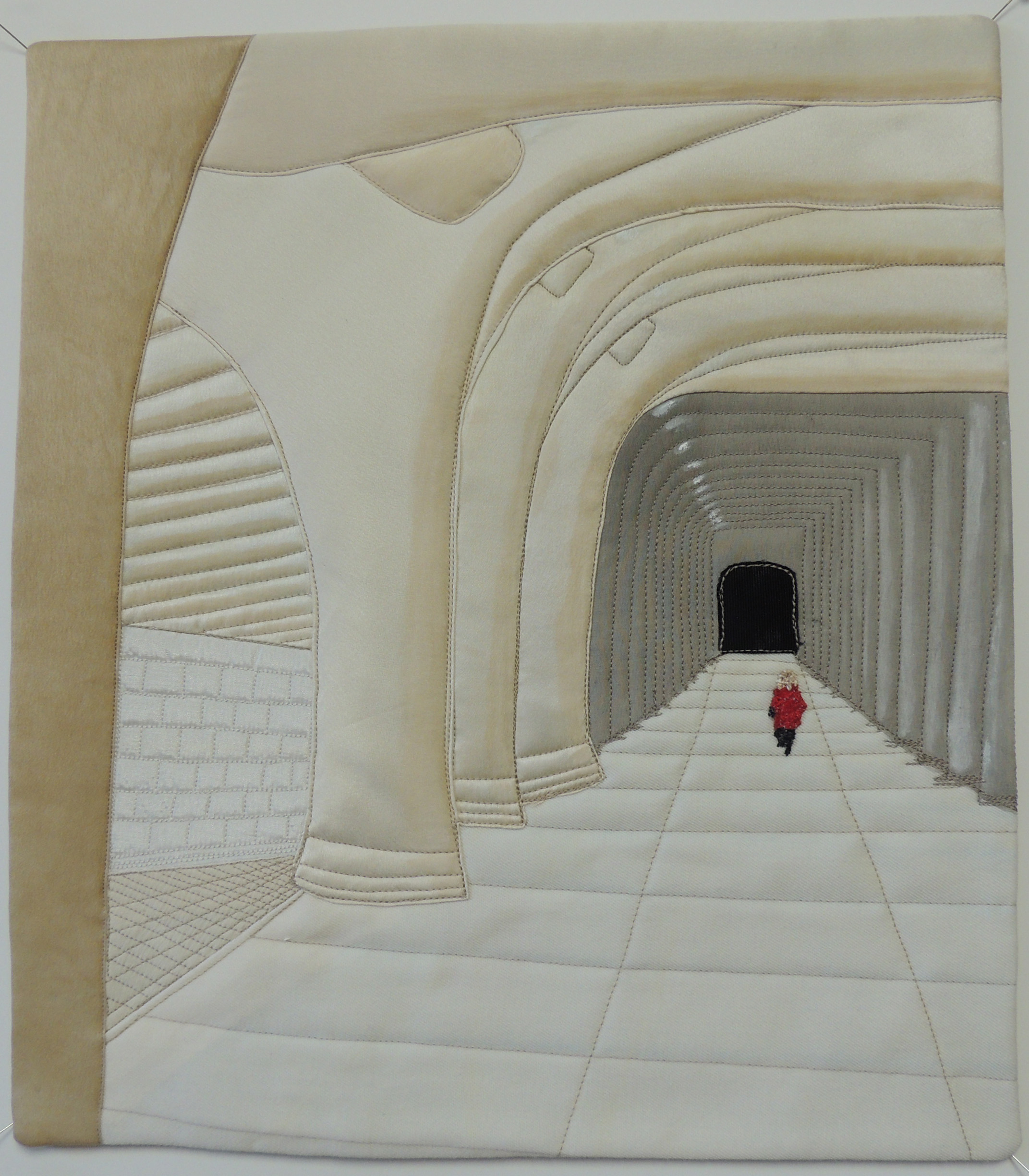 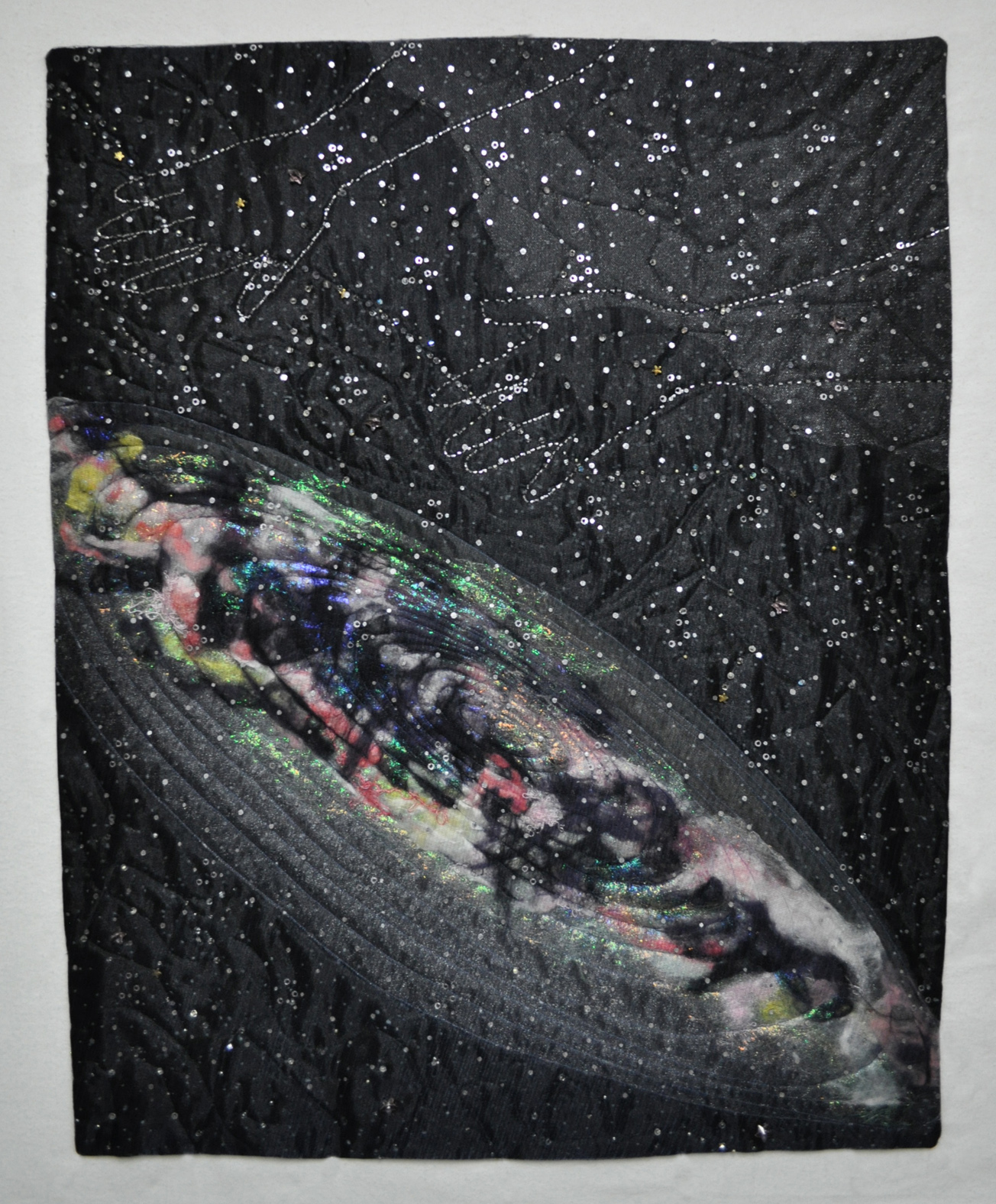