I am interested in investigating the remake culture. Remaking is not merely a practice of replicating but a way to utilize history as a database. Reconstructing the works of the past through a wide range of contemporary vernaculars transforms the meaning of the original work into something different. A remake can update the old with current elements. A remake can allow for a different interpretation of the old work from a different vantage point. In a postmodern world where the idea of originality or authenticity seems to be a romantic notion, the surge of remade movies and cultural content might be a logical trajectory. However, Western culture’s obsession with re-telling the stories of the other cultures through Western lenses does reveal political and cultural motives behind remake culture. In the visual art context, more appropriate term would be appropriation instead of remake in discussing my creative project. However, by using the word remake, I intend to imply my critical view is not limited to the world of contemporary art but targeted at bigger issues of representation in popular culture.

Hollywood remakes of Asian films reveal the underlying direction of contemporary Western culture: the revival of protectionism. Until the 1990s even the early 2000s, foreign films used to make up 10% of the American box office. American audiences used to watch foreign content with subtitles. Since then, the market 1 share of foreign films has dropped to 0.7%. Instead of showing foreign movies in their original form, Hollywood studios started acquiring rights to remake them. Foreign films, especially the ones from non-Western nations, are remade as domestic products by casting Western actors and replacing the original elements with those fitting Western taste.

The primary goal of my remake paintings is to recast iconic images of Western art with anime characters or reconstruct them through the lens of anime. Anime represents a contemporary East Asian Pop culture aesthetic. By employing the Hollywood’s remake process applied to foreign movies in my re-iteration of Western paintings, I am reversing the gaze and attempting to subvert the hierarchy between their images and mine. By reconstructing the works of the canonized western painters through the lens of anime, I am actively de-familiarizing what was once familiar and iconic. Through this process, I am destabilizing not only the iconic images of Western painting but also the hero-disciple relationship that I have with the hero painters of the Western painting tradition. The use of anime makes my interest in subverting the hierarchy between the original and the remake more visually evident.

The migration of the Buddha sculpture tradition took place in medieval East Asia. During the migration, there was a progression of transformation in the Buddha sculpture that reflected the marriage between Buddhist culture and many local cultures. That transformation came to a halt in the mid 1800s. That aesthetic has been frozen in time. By introducing new elements, I’m rebooting the transformation. However, the visual language of anime, though it reflects contemporary ideals, distorts the Buddha in another way. Anime language may be more accessible, but it also promotes a certain type of idealized form. Weirdly proportioned body and facial features reveal our distorted perception of beauty in the era of Internet and technology. Updating the visual form also draws attention to updated problems such as the idealized aesthetics of anime. 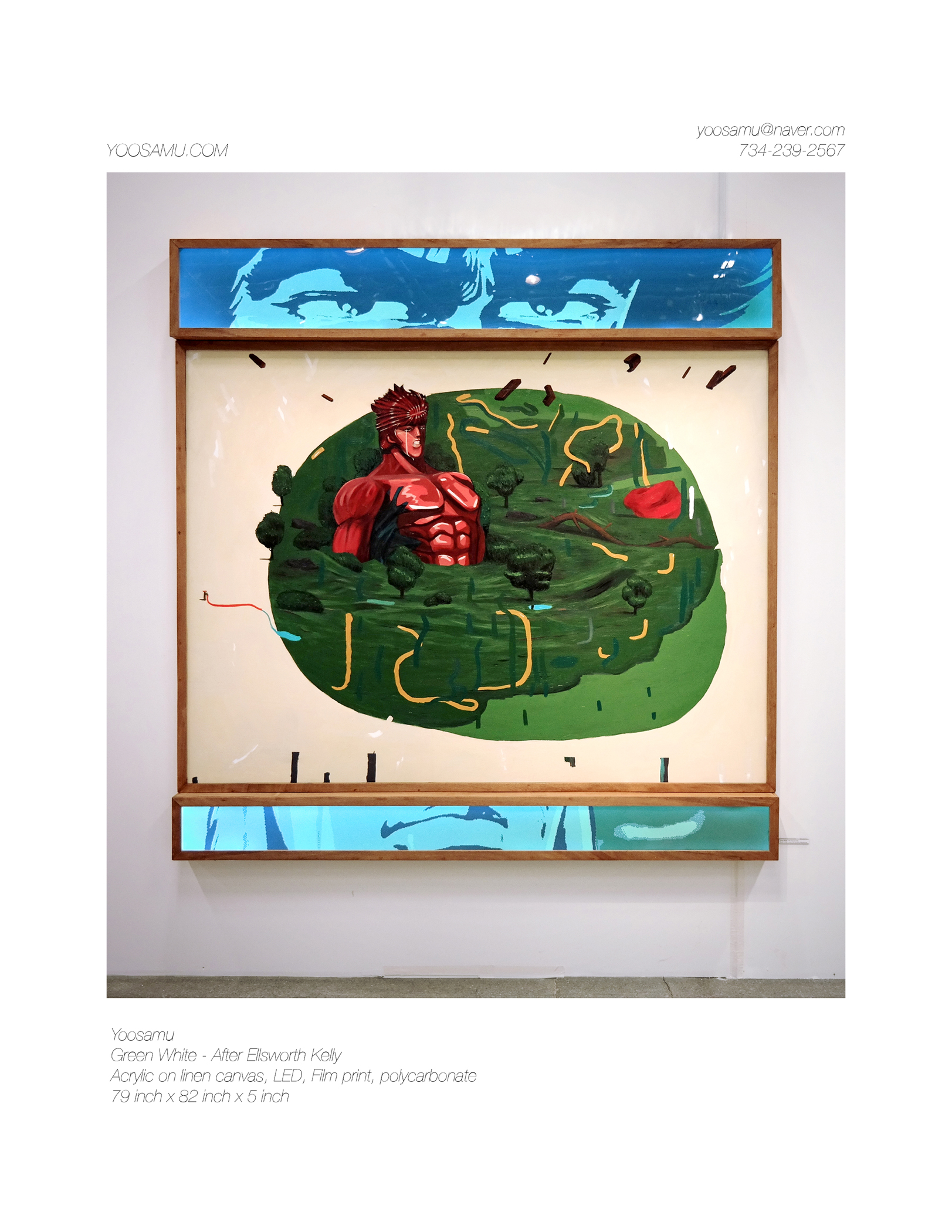 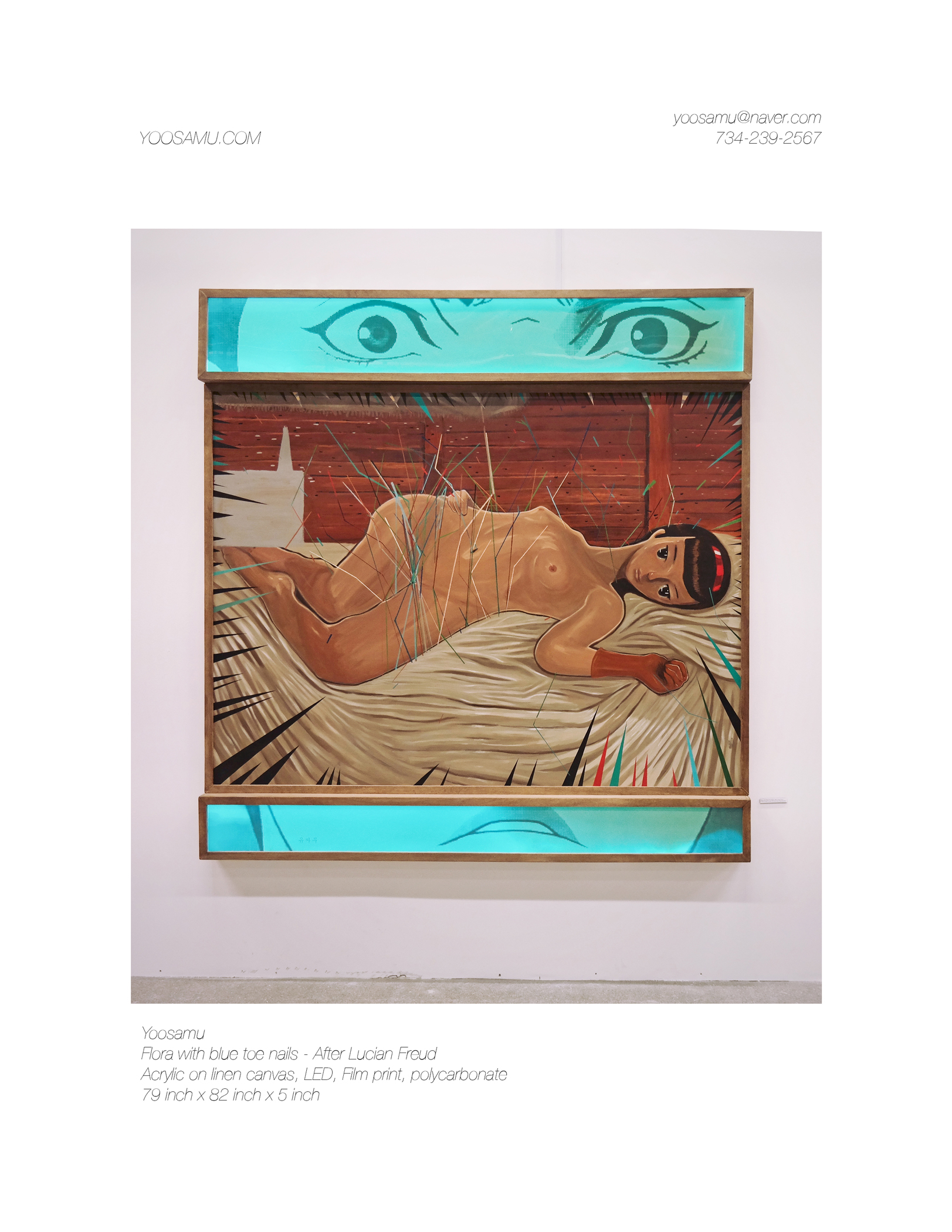 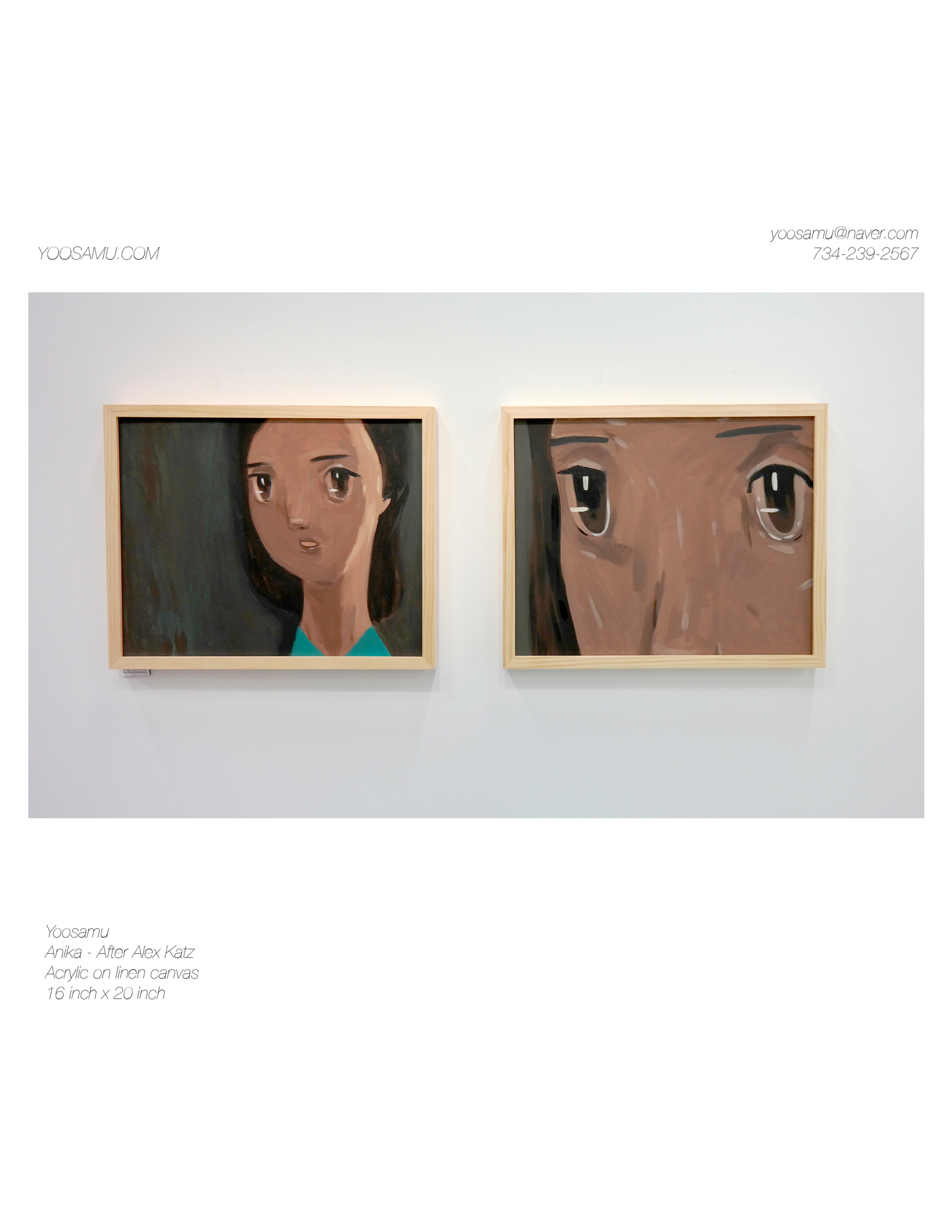 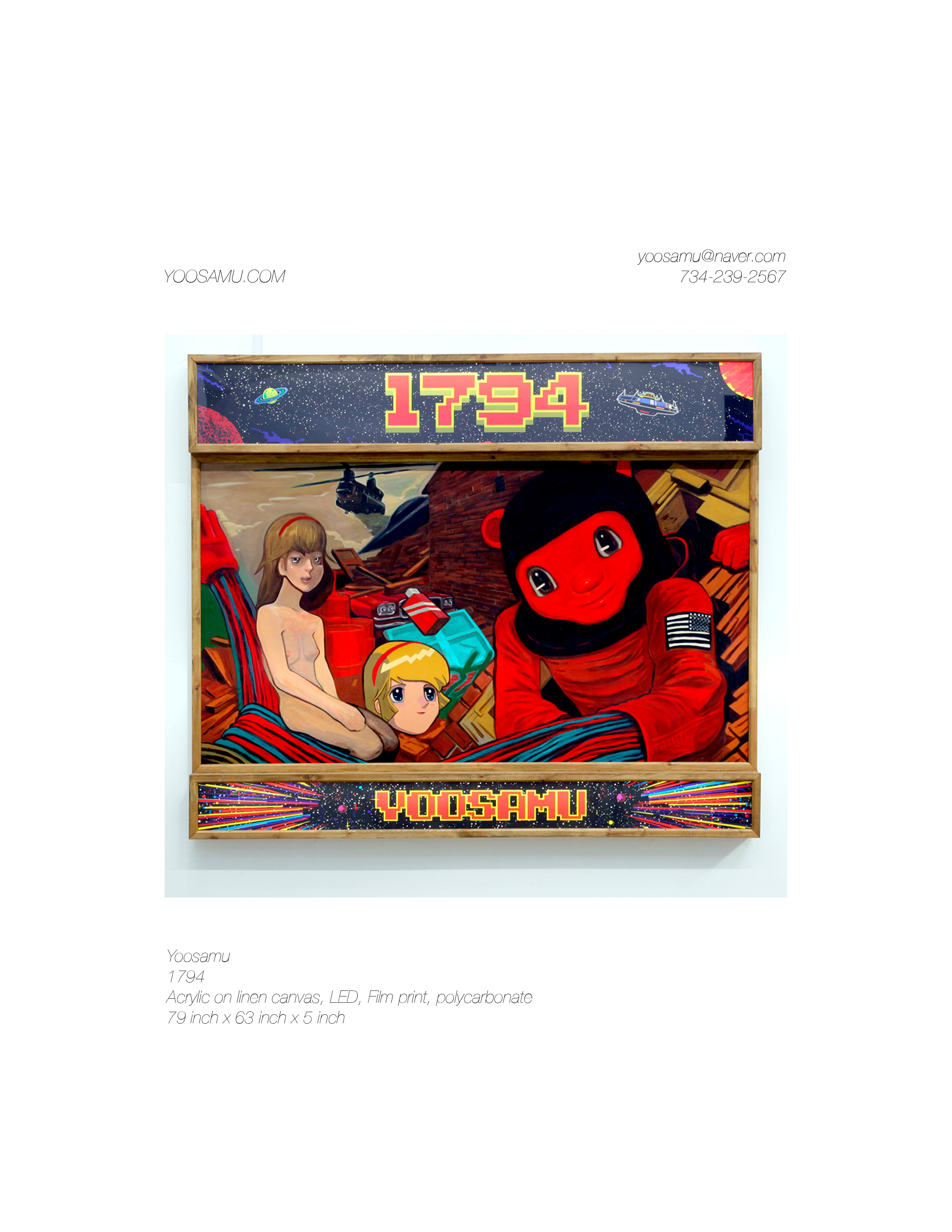 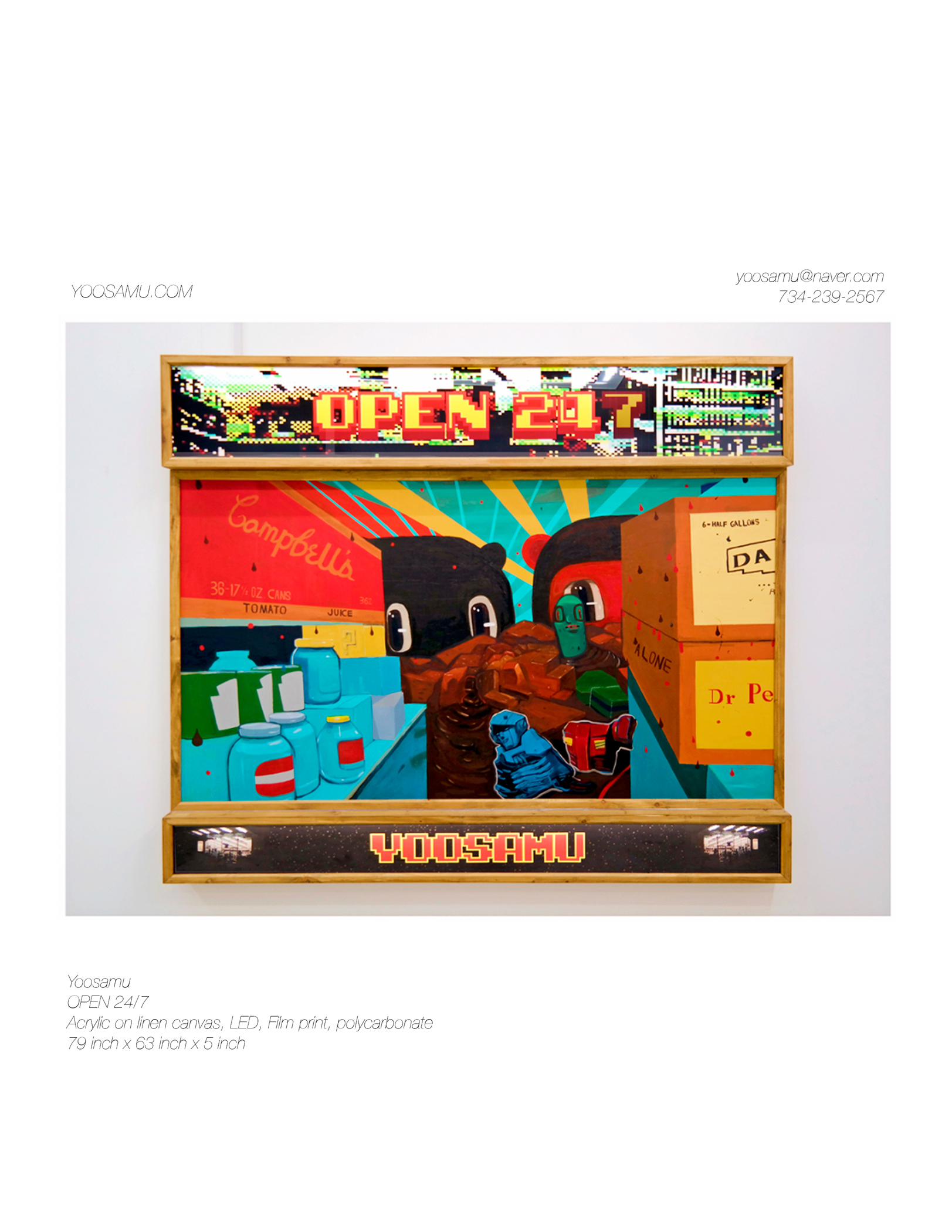 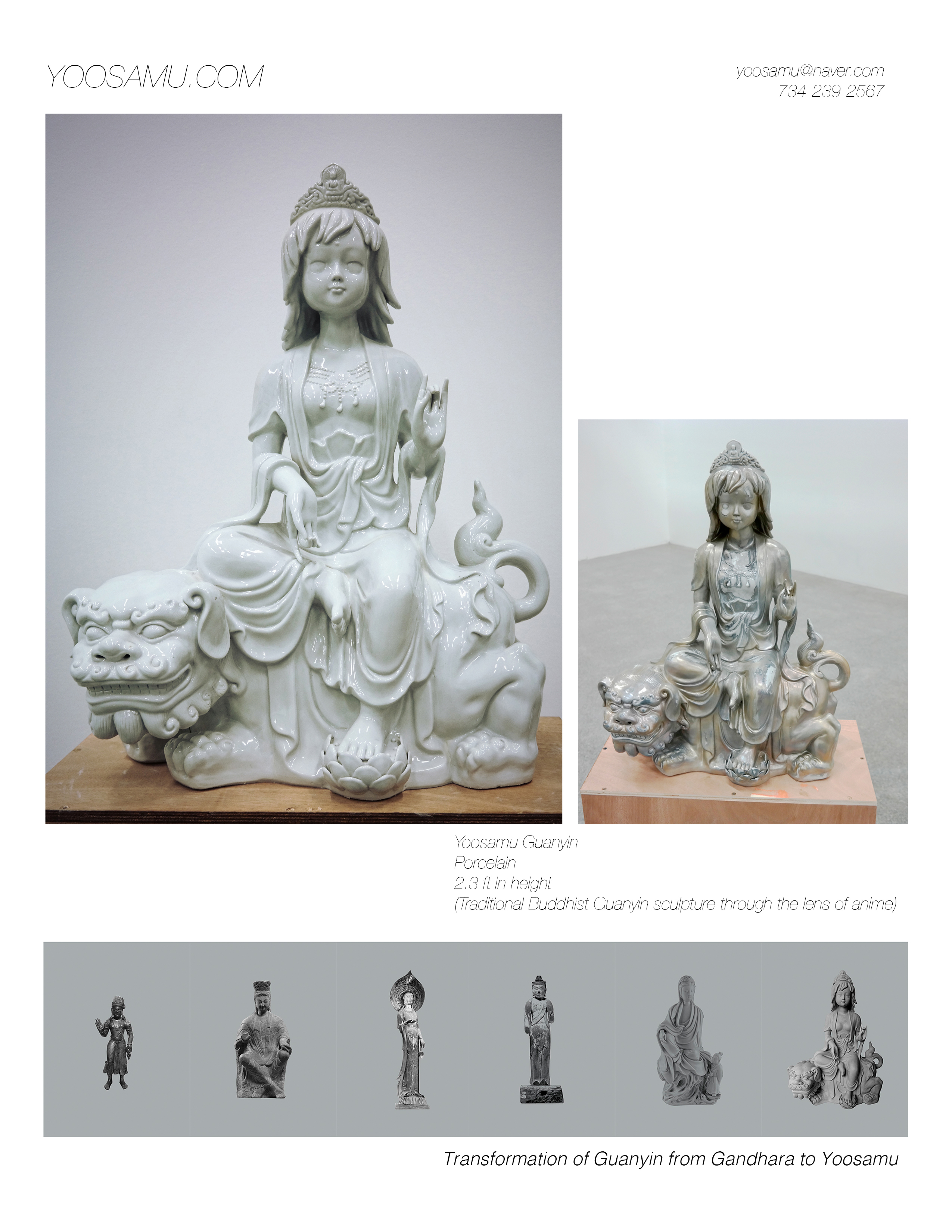